There was a small demo outside of the Swindon Job Centre on the morning of the 19th Feb, against the government’s use of ATOS, the company commissioned to vet benefits applications of sick and disabled people signed off by their DR’s It was part of a nationwide protest.

Last week I had the pleasure of meeting and photographing Simon Weston Falklands War Veteran and disability campaigner. Along with Mike Penning Minister of State for Disabled People at the Swindon SEQOL Disability Confident Conference held at the Steam Museum. Both really nice guys to talk to, in fact everybody there was a pleasure to work with and talk to.

Swindon Borough Council’s Access Day hailed a great success.
Over 20 local Swindon schools, with 160 children, attended the Swindon Borough Council’s Leisure Services Access Day last week, which was run in conjunction with the Borough’s Advisory Teachers.
Taking place at the Link Centre in West Swindon, Children with a wide range of disabilities were encouraged to have a go at a number of activities which were run by SBC’s Leisure staff and local clubs.
Croquet (Swindon Croquet Club), Fencing (Swindon Fencing Club), Wheelchair Basketball (Swindon Shock), Wheelchair Rugby (Swindon St George), Football (STFC Football in the Community), Dance (Swindon Dance), Martial Arts (Success Martial Arts), Swimming (Swindon Dolphins & ASA), Climbing, Boccia, Trampolining and Ice Skating were just a few activities on offer to the children throughout the day.
Louise Hunt, London 2012 Paralympian Tennis player was also in attendance to support the day and speak to the children, “It’s wonderful to see so many children trying different sporting activities from across the Borough. Sport is one activity that can bring a group of individuals together whatever their ability, age or gender.”
Mike Swann Climbing Wall Manager at the Ridge mentioned “it was really hard work but the best day of the year!”
John Airey from Swindon Croquet Club commented “the event was well organised with plenty of help for the children at each activity from the students from New College. It was felt by one school that the sport of croquet could be of benefit to their SRP group and inquired if Swindon Croquet Club could help with the special equipment that they had developed”.
Tony Ellis, Coach of the Swindon St George Wheelchair Tag Rugby League Club commented “we got the day off to a really good start, the youngsters were queuing up for chairs; to have a go at Wheelchair Rugby. We played at 100 Smiles per hour, great fun, for the coaches and the participants”.
The day was organised by Doug Imrie, Coaching Coordinator for the Leisure Services Team with support from Emma Waters and Sheila Hanson from the Schools Advisory Team to engage children from across Swindon in activities which they wouldn’t normally have the opportunity to try.
The day was funded by Aiming High along with funding from Project Ability and the Amateur Swimming Association. It’s only with this funding support that opportunities like this can be offered to the children of Swindon.
Over 35 New College student volunteers were coordinated by Sue Harrison to help the students gain experience of working with children with Special Needs and although there were a few nervous faces at the start, each enjoyed the day.
Coaching Coordinator Doug Imrie said ,“after the huge success of the London 2012 Paralympics this was perfect timing to offer the children of Swindon the opportunity to work with local clubs and try activities they may not have even seen or tried before. It was great to have Louise Hunt here supporting the day and meeting the children as well to add to the excitement of the day.”
For more information please follow: Twitter: AbilitySportSN or Facebook: Disability Sport Swindon 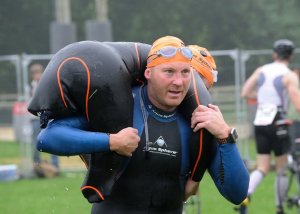 Thats what friends are for

My first example of good news and success in and around Swindon is the Cotswold 113 Triathlon. It is a local half ironman triathlon which was set up a couple of years ago now by Graeme Hardie a local triathlete and Ironman. Every race has been sold out well before the cut off dates and has been voted as one of the countries best races. Everybody who enters really enjoy the race and the course and is fast becoming a ‘must do race’. It has also become a successful company and set to grow. All this started with Graham and a few friends doing ‘training 1/2 Ironmans’ and he decided to put a race on officially. It worked.

Why am I highliting this, well firstly it is a successful company and secondly there is no shortage of people in a time of recession to spend money on races, expensive bikes, wetsuits, running kit etc. Are they doing it instead of going on holiday or denying themselves of other things, I doubt it. Keep it up is what I say.

Next, why have I used this picture. Well it is one I took at the Cotswold 113 Half Ironman. It is of Mark Airey carrying Joe Townsend through transistion and to his bike. As you will notice Joe (an ex Royal Marine) was competing in the race (and in fact went on to compete in Ironman UK), despite having both legs blown off by an IED in Afghanistan. Joe was also the person who during the Paralymic Games flew in on wires with the torch. I also wanted to highlight the fact that Mark could have raced far quicker but wanted to carry Joe through transistion, because he was his mate. Thats what friends are for eh!!!!

There are good people out there and not everybody is out for themselves.