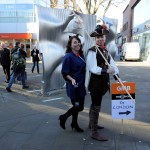 Three members of the Swindon GMB Trades Union two of which were dressed up in Panto gear were in the centre of Swindon this lunchtime. They were there to raise the issue of, hand out leaflets about and get people to sign the petition of, ‘Say No To Postcode Pay’.
This is all about the plans of twenty trusts across the South West collaborating in a cartel on radical changes to the pay and conditions of the staff (as well as cutting staff by up to 15%) and create a regional pay system. The petition is to try to get the Government to get these 20 trusts to roll back their plans and instead focus on protesting patients, staff and the economy.